Chania is the second larger city of Crete, after Heraklion. Chania, with its 108.642 inhabitants, is the capital of the Chania regional unit (there are for regional units in crete : Chania, Rethymno, Heraklion, lassithi) .  The city is divided in two  parts ; the old town and modern town.

The old town is surrounding the old harbor, from where the urban area was developped. Venetian fortifications were added to the old town from in 1538, but only the western and eastern parts are still there. The south part was destroyed and the new town was developped.

inhabited since neolithic, Kasteli is the central part of old town. Kasteli, meaning castle, was set on a hill, next to the sea, providing a secure position for a settlement and its inhabitants. it has been fortified by walls that surrounded the citadel from the very Hellenistic Times. This is evidenced by the remains of the Hellenistic walls (3rd century BC) found beneath the wall remain. During the Ottoman rule, the prominent Turks live in Kasteli. The Venetian Cathedral of Virgin Mary converted into a mosque, as was done in many other buildings of the city,

In 1898, the “Great Powers” of that time, (France, Italy, Russian empire and United Kingdom) decide the international occupation of the island. In kasteli, a neoclassical architecture building  housed the headquarters of the Great Powers. Today it houses the offices of the rectorate of the Technical University of Crete.

(from Turkish şadırvan ‘fountain’. It’s the main square of the old town, also known as  Eleftherios Venizelos Square, . It is the heart of the touristic activities in the area.  Encircled by cafes, restaurants and several other shops, the square is very popular on week ends and during celebration days, where locals go for coffee,ice cream, restaurants,…

Set on the west side, Topana was the Christian quarter during the Ottoman period. Its name comes from the Venetian ammunition warehouse (Turkish tophane), Venetian ammunition warehouse, which is still preserved at the end of Theotokopoulou street. The fortress of Firkas that was built by the Venetians at the north end of Topanas, right next to the entrance of the harbor of Chania, is converted into barracks, while later in the 19th century it is used as a prison.

many of historical buildings with Venetian, Turkish or European architecture, were renewed and ar are operating either as hotels or as shops, cafes and restaurants. This make topana area a very beautifull place to stroll in the small alleys and historical streets

there were two synagogues built in the Jewish quarter of Chania. One was completely destroyed by the bombardment of the city of Chania by the german luftwaffe aircrafts in World War II, and the other one abandoned when the Jewish community dissolved in 1944.  Very few Jewish people escaped the Nazis. Those who captured were sent on the SS Tanais, a greek cargo boat  requisitioned by the German occupation forces., to concentration Auschitz. On 9 June 1944, the boat was torpedoed by a Royal Navy submarine and sunk off the port of Heraklion, Crete, killing several hundreds of deported Cretan Jews.

In the mid-1990s, the Jewish synagogue of Etz Hayyim, in Kondaki street,, was restored and since then is in a use.

The modern part of Chania is where most locals live and work. It is less traditional than the old town, but there are still areas of some historical interest. The oldest district of the modern city is Nea Hora (meaning “New Town”) and is from early 18th century .. During the same era the district of Halepa began to grow to the east of the city and used to be home for the local aristocracy.

Other historical buildings in the area include Eleftherios Venizelos’s House (built 1876-1880), the old French school (now property of the Technical University of Crete, housing the Department of Architecture), the Church of Agia Magdalini (built 1901-1903), The “Palace” (built 1882, house of Prince George during the period of the Cretan independence) and The Church of Evangelistria (built 1908–1923). Part of the marine area of Halepa is called Tabakaria, where a unique architectural complex of old leather processing houses is situated

The district of Koum Kapi (the Venetians had first named it “Sabbionara”, which means “the Gate of the Sand”, the same as “Koum Kapi”) situated beyond the walls at the eastern part of the old town, was also one of the first places to be inhabited outside the fortification walls. Initially, it was home for the “Halikoutes”, a group of Bedouins from North Africa who had settled there in the last years of Ottoman rule. Nowadays it is a developing area with many cafes, bars and restaurants on its beach.

The 1913 indoor market (“Agora”), is on the edge of the old town and is popular with tourists and locals alike. 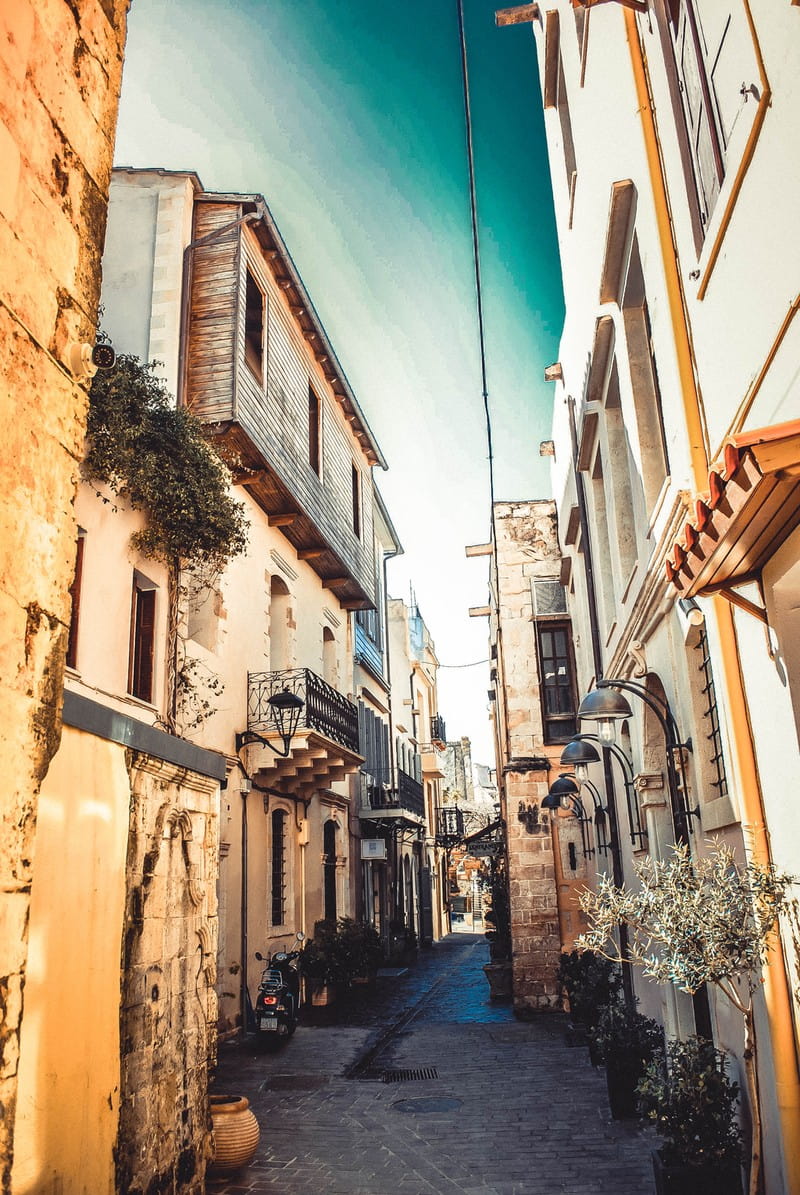 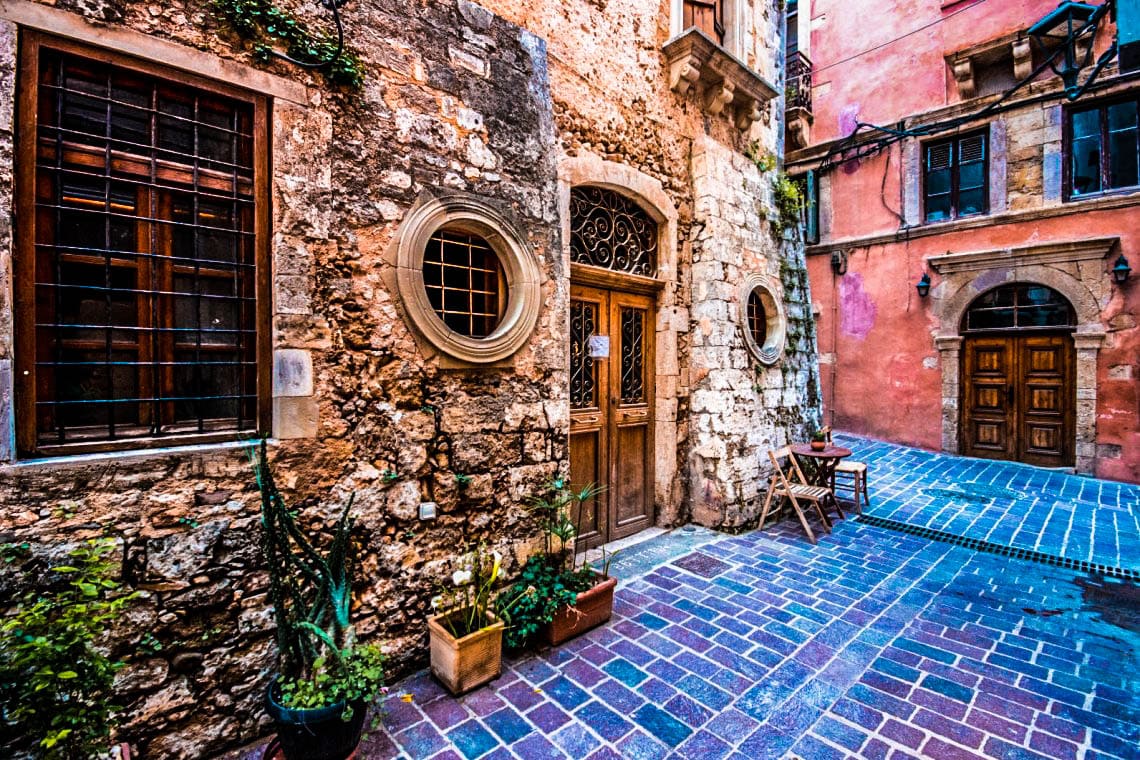 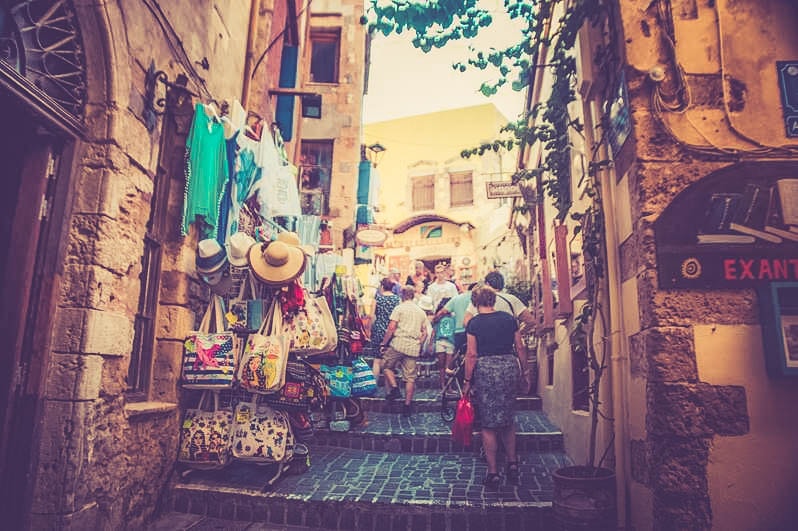 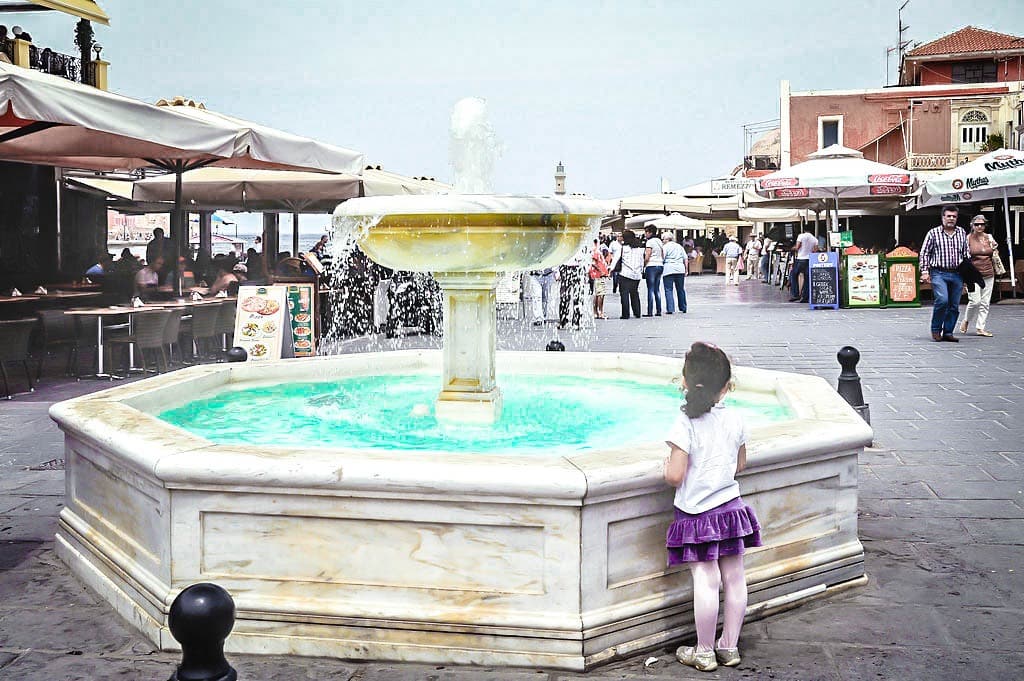 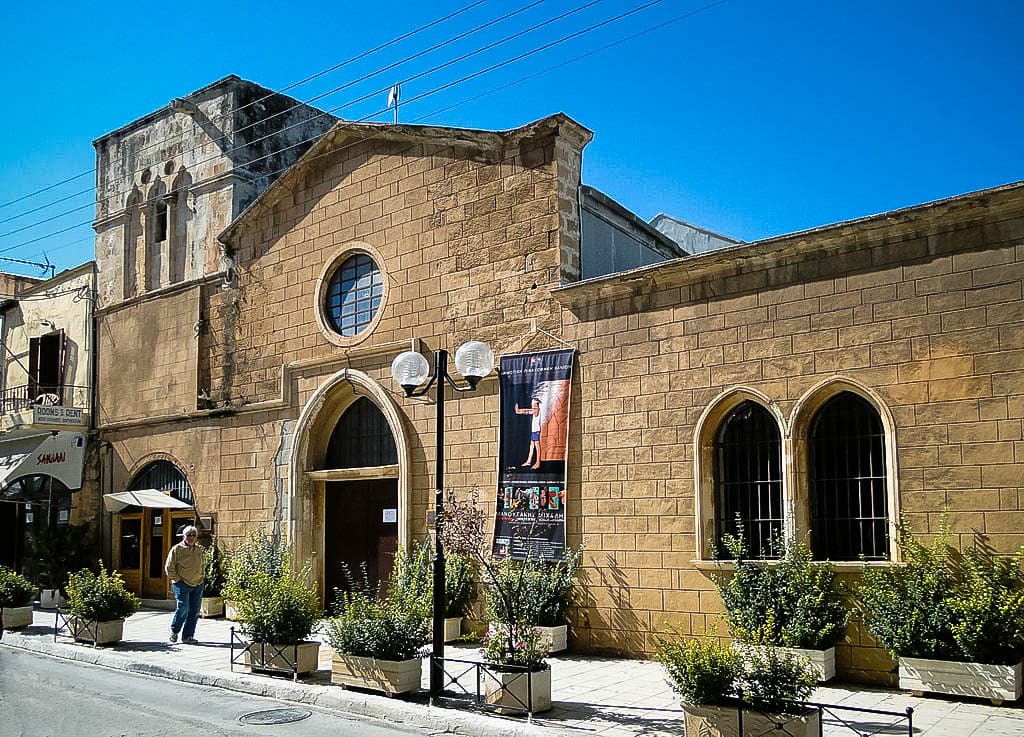 Book your flight to Chania

Chania is the site of the Minoan settlement called Kydonia, (meaning quince in greek). Its name appeared on Linear B as ku-do-ni-ja.  Cydonia was one of the five great cities of Minoan Crete, although exact location of the ancient city was not even resolved until the latter half of the 20th century. Cydonia was the most powerful centre of western Crete and producing Bronze Age pottery and was one of the first cities of Europe to mint coinage. Cydonia was established as a Neolithic settlement in the fourth millennium BC, as archaeological excavations in the old town of present day Chania have revealed .

The city reemerged after the end of the Minoan period as an important city-state in Classical Greece, one whose domain extended from Chania Bay to the feet of the White Mountains. The first major wave of settlers from mainland Greece was by the Dorian Greeks who came around 1100 BC. Kydonia was constantly at war with other Cretan city-states such as Aptera, Phalasarna and Polyrrinia and was important enough for the Kydonians to be mentioned in Homer‘s Odyssey (xix.200). In 69 BC, the Roman consul Caecilius Metellus defeated the Cretans and conquered Kydonia to which he granted the privileges of an independent city-state. Kydonia reserved the right to mint its own coins until the 3rd century AD

The early Christian period under Byzantine rule and the rule of the Arabs, who called the settlement Al Hanim (“the Inn”), are not well documented. Under the Arabs, the Christian population was persecuted and moved to the mountains. The Byzantine Empire retook the city in 961 AD . In this period the Arabic name of the city was changed into Greek Chania. Byzantines began to strongly fortify the city in order to prevent another Arab invasion, using materials from the ancient buildings of the area.

After the Fourth Crusade (1204) and the fall of Byzantium , Crete was given to Bonifacio, Marquess of Montferrat. He sold it to the Venetians for 1000 silver marks. In 1252 the Venetians managed to subdue the Cretans but in 1263, their rivals of Genoa, with local support, seized the city under the leadership of Enrico Pescatore, count of Malta, and held it until 1285, when the Venetians returned. Chania was chosen as the seat of the Rector (Administrator General) of the region and flourished as a significant commercial centre of a fertile agricultural region. The Venetian rule was initially strict and oppressive but slowly the relations between the two parts improved. Contact with Venice led to close intertwining of Cretan and Venetian cultures. The city’s name became La Canea and its fortifications were strengthened, giving Chania the form that it still has today. On the other hand, after the fall of Constantinople in 1453, many priests, monks and artists took refuge in Crete and reinforced the Byzantine religion and culture on the island. The city of Chania during the period that followed was a blend of Byzantine, Venetian, and Classical Greek cultural elements. Many of the important buildings of the town were built during this era and the intellectual activities (written word, music, education) were also promoted.

During the opening months of the Cretan War (1645–1669) the city’s walls did not prevent an Ottoman army from capturing it from the Venetians after a two-month siege. Many Cretans fled to escape persecution, many others were slaughtered or converted to Islam, while numerous Turkish Muslim settlers arrived .

Muslims resided mainly in the eastern quarters, Kastelli and Splantzia, where they converted the Dominican church of St Nicholas into the central Sovereign’s Mosque (Turkish: Hünkar Camısı). They also built new mosques such as the Küçük Hasan Pasha Mosque or Yali Mosque on the harbour. Hamam (public bats) , and fountains were a feature of the Ottoman city.  the headquarters of the Turkish Governor of Crete, is installed in Chania, at the northern end of the kasteli hill, in a government complex building called “The Konaki,” that housed the home of Pasha, prisons, as well as living space for the guards.

The city remained under Ottoman control despite fighting during the Greek War of Independence (1821-29), the Cretan Revolt (1866–1869) and the Cretan Revolt (1878). Due to the island’s mixture of Muslim and Christian residents, Crete was the subject of international debate between the European great powers, most notably at the Treaty of Berlin (1878) which resulted in the Pact of Halepa.

In 1898, during the final moves towards independence and enosis—union with Greece—the Great Powers made Chania the capital of the semi-autonomous Cretan State (“Kritiki Politeia”), with Prince George of Greece, the High Commissioner of Crete living here. During these years Crete issued its own stamps and money. This was a very important transitional period when the city became more cosmopolitan and flourishing, regaining its role as the crossroad of civilizations, influenced by Europe as well as by the East. Many important buildings were built during this era, intellectual and artistic societies were created and a new class of local aristocracy brought a different atmosphere to the everyday life of the town. The district of Halepa has many fine neoclassical embassies and consulates dating from this period.

However the main goal was enosis with Greece which came after Eleftherios Venizelos‘s constant opposition to Prince George’s rule over Crete. In 1908, Venizelos managed to establish a revolutionary government, recognized by the Great Powers. His later election as the prime minister of Greece (1910) eventually led to Crete’s union with Greece on 1 December 1913, following the Balkan Wars. The Greek flag was raised for the first time at Fort Firka in the Old Harbour in the presence of Venizelos and King Constantine.

Another important period for the city of Chania was the invasion and occupation by German forces during World War II. The British force that faced the German paratroopers during the Battle Of Crete in 1941, had artillery elements over the hill of Dexameni in the south of the city. These elements bombarded the German forces in the Maleme airfield undetected, until they ran out of ammunition. George II of Greece stayed in a villa near the village of Perivolia outside Chania before escaping to Egypt. Part of the city was bombed and a significant proportion of the area’s population was either executed or imprisoned due to participation in the resistance against the German rule.

The cathedral  of the presentation of Virgin Mary, also called the catholic cathedral of Chania, or Trimartiri, was build on…

the Turkish mosque Yiali Tzami (or Giali Tzami, or  mosque of Janissaires). It is very easy to spot. Situated by…