The Palace of Knossos. It is the largest of the preserved Minoan palatial centres. It is sited 5 km southeast of the city of Iraklion, on the Kephala hill, in the valley of the river Kairatos that comes from Archanes. Scientists say that the river was flowing all year round as climate was quite different 4,000 years ago. Some say large parts of Crete were even covered with dense forests.
The site was continuously inhabited from the Neolithic period (7000-3000 B.C.) until Roman times. According to tradition, it was the seat of the legendary king Minos. The Palace is also connected with many thrilling legends, such as the myth of the Labyrinth with the Minotaur, and the story of Daidalos and Icaros.

The site was discovered in 1878 by Minos Kalokairinos, who discovered big clay jars (called in greek pytharia) . The excavations in Knossos began in 1.900 A.D. by the English archaeologist Sir Arthur Evans (1851- 1941) and his team. Sir Evans first came in Crete in 1894 as he showed big interest in ancient coins and the writing on stone seals from Crete . In 1899, after a meeting with Heinrich Scliemann (the archeologist who discovered Troy) he was conviced about what he could find in Crete. He bought a large plot of land, in wich he believed was located the ruins of Knossos. The excavations revealed part of the splendour of the palace and sized 2,2 hectares the first year. They were continued for 35 years, revealing to the world that the palace of Knossos was undoubtedly the ceremonial and political centre of the first european flourishing civilization. The evidence found in Knossos, as cemeteries, central civil buildings,… tend to prove that Knossos was not only a palace, but a palace complex. New fieldworks in 2015 reveals that, at its apogee in the 17th century B.C., Knossos palace and the city surrounding boasted a population of 100,000 people !

The first settlement was established during the Neolithic Aceramic Period. 7,000 B.C. (period called so because no ceramics potteries were found) . Historians and scientists believe that first indication of human activity on the island is located in the exact area where the Palace is located.
For Sir Arthur Evans, Neolithic people arrived from elsewhere, probably from East, overseas, by boat. During transition from Neolithic to Bronze age, new inhabitants came from the East and small villages grew up in the area. Large numbers of clay and stone incised spools and whorls attest of cloth-making. Stone weapons and human and animal figurines were also found. At that period, people possessing sheep, pigs, cattle, and growing grains cmae to settle in Knossos.
The settlement growed slowly in the early neolithic (6,0005,000 BC ) to reach about 600 people to reach, in Middle Neolithic, (5,0004,000 BC) more than 1,000 people.
Scientists believe, and so did Arthur Evans, that big immigration movement to Knossos appeared in late Neolithic (4,000-3,000 B.C).

The first palace of Knossos

The first palace was built about. 1900 BC on the ruins of the older settlement and covers an area of 20,000 square metres. The complex was constructed ultimately around a raised Central Court on the top of Kephala Hill, on an north-northeast axis. The palace was close to Kairatos river. In ancient times the flow continued without interruption and provided population with drinkable water. The location was choosen also to be not far away from sea (the minoan harbor, not far away to modern Heraklion harbor, was about 5km away from the palace) A minoan road connected the port to the palace complex and ended in the palace as the royal road (the last vestige of the Minoan road) .
It included West Facade whith an upper floor , walkways in the West Court, and the kouloures (three large circular pits sunk into the West Court), storage magazines and workshops. This period is also the begining of improvments like drainage systems in parts of the Minoan town and in the Domestic Quarter and the North Entrance of the Palace.
The first palace building was an evidence of minoan political structure transsformation, from multi clans to a unified nation under a central government .
The first palace was destroyed around 1,700 B.C, probably by a large earthquake

The second palace of Knossos

If other minoan palace, like Phaistos (Faestos) were completly destroyed by this hearthquake, it seems that Knossos palace was not. The second palace was built by addition to the first place. Old buildings, heavily dammaged by earthquake, were repaired while new building raised from ground. The period between 1,700 and 1,450B.C is known to be the most flourishing period of minoan civilization. Palace was rebuilt on a larger scale, with architectural efforts on imbricated buildings further than defense effficiency, as the Minoans maybe believe that their powerful fleet would protect them from invasions. The 1,300 rooms are connected with corridors of varying sizes and direction. The palace has 4 entrances (N, S, W, E) all leading to central court.
Some improvements were made : major entry route into the palace passed along the corridor of the procession, stairs led to the first floor of the west wing, the Throne Room and lustral basin, the srand staircase of central court and the domestic quarters, extensive storerooms. From that period are also major wallpaintings and frescos. The palace used also advanced architectural techniques. Some buildings had five stories. The palace had at least three separate water-management systems: one for supply, one for drainage of runoff, and one for drainage of waste water.

In mid 16th century B.C, part of the island was touched by Tsunami, after the eruption of Thera vulcano, in Santorini island, some 120 kms north from Crete. Archeologists first dated this erruption approximately 1,500B.C but scientists now believe it was closer to 1600 B.C. French scientist Jacques-Yves Cousteau was one of the first to investigate about huge tsunami effect on minoan Crete as he dived close to Dia island in search for the Atlantis sunken city. Archeologists and historians agree to spot this eruption as the begining of the end of minoan civilisation. Knossos palace was not fully destroyed by the eruption in itself but Minoans lost their powerful fleet and became very vulnerable to the invading Mycenaeans (in 1450 B.C). Palace was also dammaged by big fires in 1300 B.C. Final destruction date of Knossos is still the subject of debate .
One of the most important developments during this period of the history of Knossos is for sure the arrival of Linear B writing ( known to be an early form of the Greek language spoken by the Mycenaeans). This writing has been deciphered, while the linear A, that was a different language, is still not undeciphered.

From that time, Knossos was slowly abandoned and left to decay. Knossos was still an important town during ancient Greece but was destroyed during the war against its neighbour Gortyna, during the 3th century.

Sir Arthur Evans was criticized later for his decision to rebuild part of the knossos palace with concrete, partly to ensure basemements of what he discovered. The way archeologists proceeded the excavations in 1900’s is also criticized as it made very difficult to go further in analysing the oldest parts of the palace. Despite this, Evans discovery of a town that was till then a myth ( the town was enounced in Homer’s Iliad) is a great archeological treasure.

The mains things to see in Knossos palace :

The old palace remains are on the west court The court was maybe the marketplace or public gatherings place. With Kouloures (three circular pits used for grain storage). The court would have formed a link between the palace and the town. The west side of the old palace could have been used for administrative and storage purposes, as can suggest the hieroglyphic tablets found there. 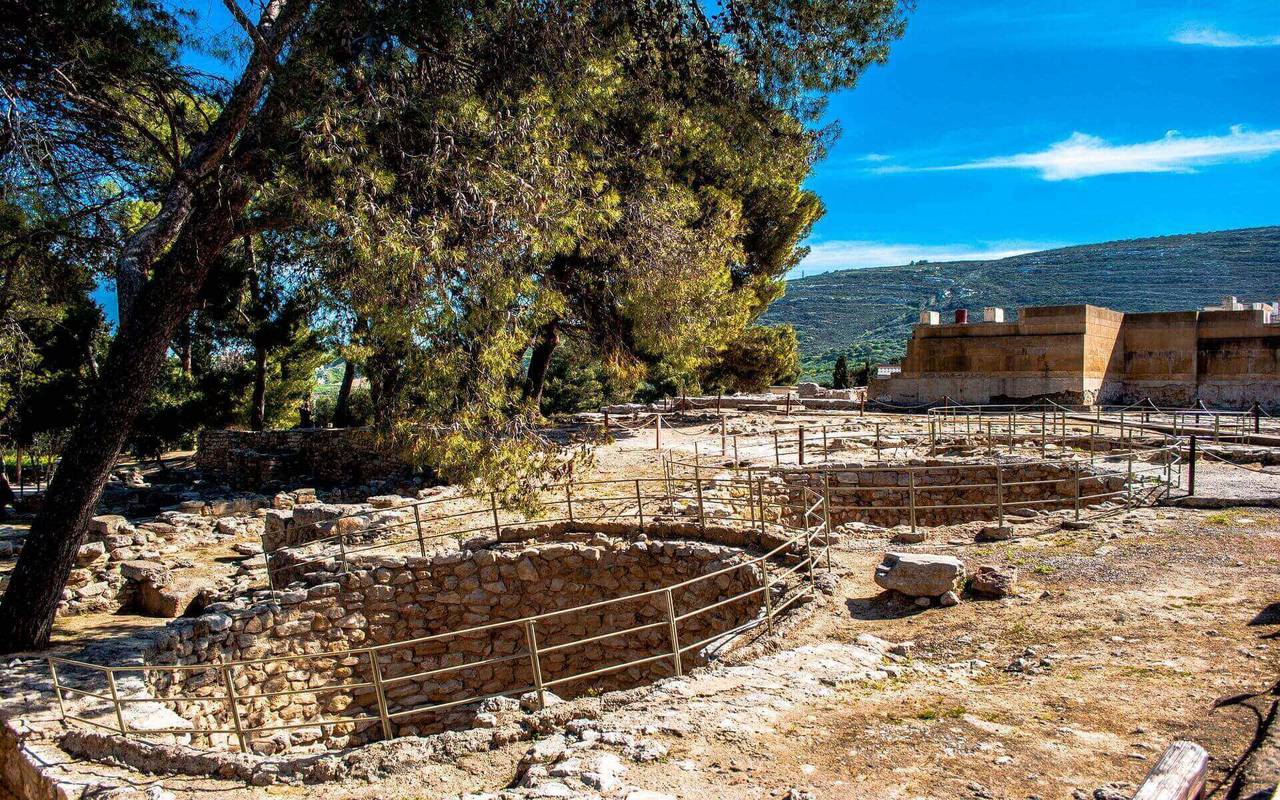 The West Entrance
It is the main entrance of the new palace. The West Porch includes a square portico with a central column and opened on the corridor of the processions (the procession fresco) and south propylon ( fragments from the cupbearer fresco ) and, up, the famous « sacred horns »

On the West Side of the Palace is one of the most famous of rooms unearthed by Evans, the Throne Room. The throne is placed along a side wall facing across the room. On either side of the throne there are stone benche for up to sixteen persons. Some archeologists hace another theory about this trone. It could have been a religious one (a priestess) and not the king throne.

This room is linked to 9 other rooms and a storage room
To the south of Throne room is the Snake Goddess Sanctuary, where the minoan snake goddess figurine was found. This statue is one of the most famous of minoan civilisation.

The theatre , located north west from the entrance, could contain approximately 400 people. It was maybe used for different public religious ceremonies.

East side of the palace
There are king Minos royal quarters, Queen’s room . The east side of the palace had four levels but only three remains (the second level was adjacent to the central court). Arthur Evans designated the lower level to be the residential quarters, reached by the grand staircase also leading to upper levels. Grand staircase of 54 steps lead to hall of double axes.

Book your ticket to Knossos

Myths and mythology about Knossos

In Greek mythology Minos was the first King of Crete, one of the 3 sons of Zeus and Europa (with Sarpedo and Rhadamanthys). After he ascended the throne of the island of Crete, Minos competed with his brothers to rule. Minos prayed to Poseidon (the sea god), to send him a white bull, as a sign of gods. As he didn’t kill the bull to show honor to Poseidon. The god decided to punish him and made Pasiphae (Minos’s wife) fall in love with the bull. With the help of the architect Daedalus, who built her a hollow wooden cow, Pasiphae mate with the bull. The minotaur was born from this procreation and the monster, half man half bull, devoured humans for sustenance. After getting advice from the oracle of Delphi, Minos asked Deadalus, his architect, to build a huge maze to imprison the minotaur under Knossos palace. To feed the animal, Minos forced athenian king Aegeus to send him every seven years seven Athenian youths and seven maidens to be devoured by the Minotaur. When the third sacrifice approached, Theseus, the son of Aegeus, volunteered to skill the monster. He promised his father that he would put up a white sail on his journey back home if he was successful, but would have the crew put up black sails if he was killed.
One arrived in Crete, he met Minos’ daughter Ariadne, who fell madly in love with him and helped him find his way through the labyrinth by giving him a ball of thread to retrace his path.
Theseus killed the Minotaur. On the way home, Theseus abandoned Ariadne on the island of Naxos and continued. He forget to put up the white sail. King Aegeus, from his lookout on Cape Sounion, saw the black-sailed ship approach and, presuming his son dead, thrown himself into the sea that is since named « Aegean » sea.
King Minos blamed Daedalus for that and the architect decided to escape from the island with his son Icarus. Daedalus tied feathers together, secured the feathers at their midpoints with string and at their bases with wax, and gave the whole a curvature like the wings of a bird.
Daedalus warned Icarus not to fly too high, because the heat of the sun would melt the wax, nor too low, because the sea foam would soak the feathers. After the island of Delos, Icarus began to soar upward toward the sun, forgetting his father’s advice. The sun softened the wax and Icarus quickly fell in the sea, where he died.

Where to sleep close to Knossos