Discoveries, in Crete, of a polish paleontologist may change theory about hominin evolving in Europe

In 2002, Gerard D. Gierliński discovered  two tracked surfaces   in a natural outcrop above the beach, close to the village of Trachilos, west of Kissamos (also known as Kastelli), in the Chania Prefecture of Crete . The Polish paleontologist originally was in Crete for holiday with his girlfriend.  As a paleontologist working for polish institute, he always carry with his tiles (gps, hammer, camera,… in case of discoveries) . So, when discovering footprints in rock, he knew what to do. Pictures were token and gps exact location set. And the  discovery changed a little bit about their vacation schedule…

In 2010, he returned to Trachilos with other researchers to explore the tracks in detail. when Gierlinski saw the Trachilos footprints for the second time and recognized their human-like shape, he realized that he had found something extraordinary. Tracks were from  Miocene era .  Individual prints from surfaces were  scanned at higher resolution. The tracks were dated by using the underlying rock bed, predominantly sedimentary, and foraminifera and present a succession of shallow marine late Miocene carbonates and siliciclastics of the Roka Formation, between 8.5 Ma (late Miocene, Tortonian) and 3.5 Ma. 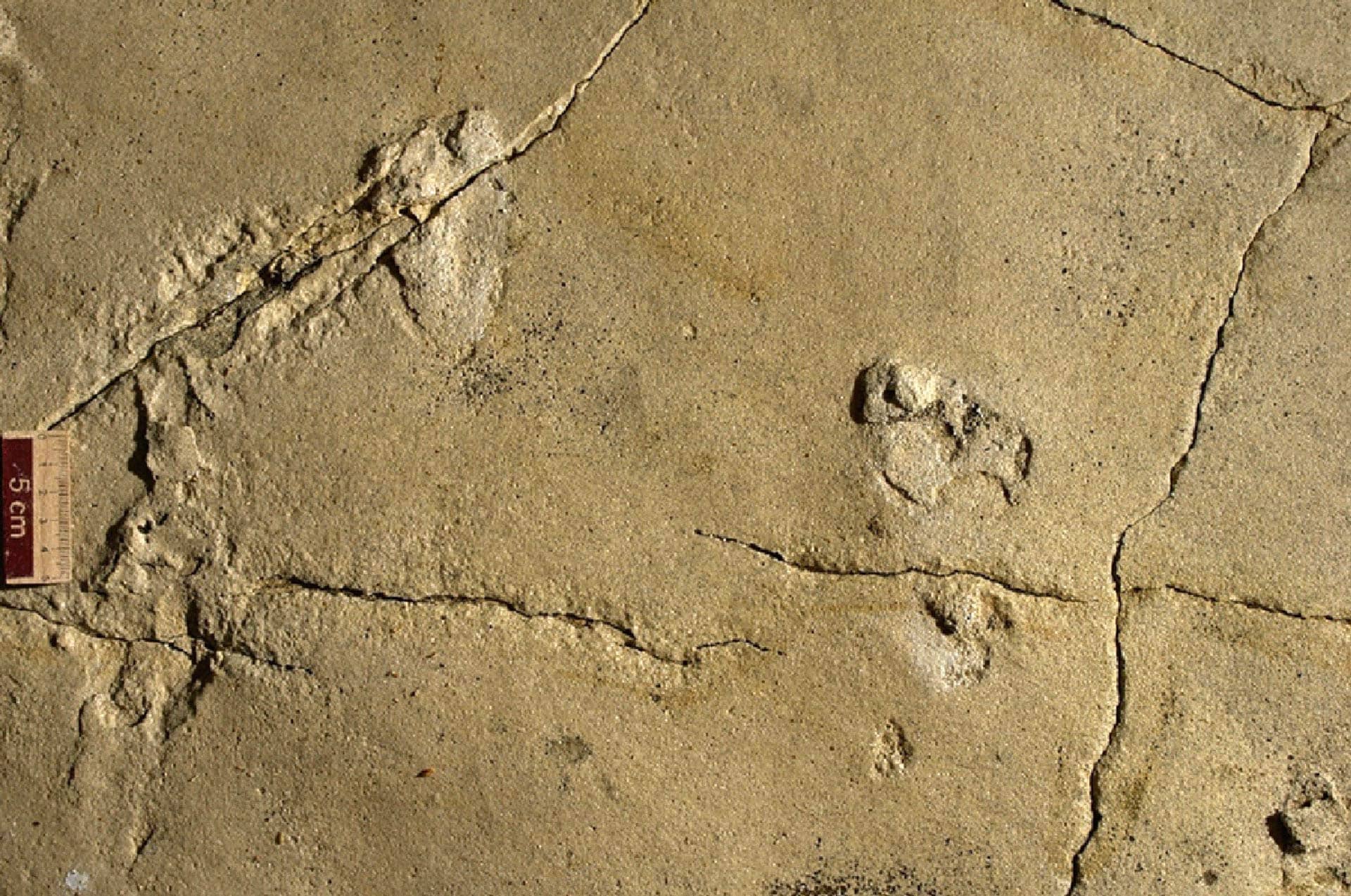 The scientist tem is describing tracks  as “The ichnofossils on surface  number more than 50 in total on an area of less than 4 m2 . Their size ranges from less than 50 to more than 200 mm in length , but this includes a distinct subset of small and irregular features of uncertain origin. The ichnites that can most readily be identified as footprints range in size from 94 to 223 mm. Although individual trackways are difficult to discern on the densely trampled surface, the majority of footprints show a NE-SW long axis orientation and show that the trackmakers were travelling towards the present-day southwest. An apparent pair of left and right footprints may have been made by a stationary individual, but we cannot exclude the possibility that this is a chance association”.

When Gierliński and his team tried to publish the study, they received harsh criticism due to the findings going against the widely accepted hypothesis of early hominins or primates evolving in Africa alone. So Gierlinski and his team were facing against “Africanist “scientists. Till then, the oldest tracks were a group of human-like footprints  left in volcanic ash at Laetoli, Tanzania, 3.66-million-year-ago.The Miocene also predates Ardipithecus, a fossil hominin with an ape-like foot that lived in modern-day Ethiopia 4.4 million years ago and is thought to be part of the human lineage.

According to the study, the Trachilos footprints may represent an early hominin or primate species that may have evolved hominin-like feet independently, outside of Africa. This suggests the possibility of convergent evolution. The theory of convergent evolution suggests the possibility of two or more different species adapting similar traits and characteristics to each other, resulting in a similar species.

n an interview at the CBC News, researchers claimed that while they were trying to publish their work about the footprints at high-profile publications they got “ferociously aggressive responses”, criticism and rejection from reviewers and editors. According to the researchers “Basically, it wasn’t a true peer review process at all,” “They were just trying to shut us down.” After multiple rejections from other publications, the study was eventually published in the journal, “Proceedings of the Geologists’ Association. Shortly after the research about the footprints was published, some prints were chiselled out of the rock and stolen.thus, greek authorities, accodring to the high scientific interst of these discoveries, have protected site