Zeus, gods of the gods, mythology and Crete

zeus, gods of gods in greek mythology, has a special link with crete.

grown up on the island, in the diktaion andron cave,

protected by curetes and feeded by sacred goat

According to Greek mythology, the story of Zeus is intimately linked to the island of Crete. Zeus will keep with his cradle and place of residence during his youth a special relationship. No surprising that religion of Zeus flourished on the island. The comparative study of grek mythology and history allows us to establish that the religion of Zeus flourished mainly in the middle part of the island, in the regions of Ida and Dicte, and that the cities of Gnossus, Gortyn, Lyctos, Pracsos and Hierapytna were the oldest and most important seat of this primitive cult.

Uranus had prophesied that Cronus should be de throned by his own son . Fearing this fate , as soon as children were born to him Cronus swallowed them . He had thus disposed of five children when Zeus was born . Rhea , having a special desire to preserve this child , dressed a stone in his clothing and gave it to Cronus , who swallowed it in place of the child . Zeus was hidden in the island of Crete. His mother gave him in charge to Themis , who got the goat Amalthea to nurse him , and ordered the Curetes , the armed priests of Crete , to make loud noises by clashing their arms and shields, to prevent Chronos hearing the little one cry .

Zeus and the Curetes 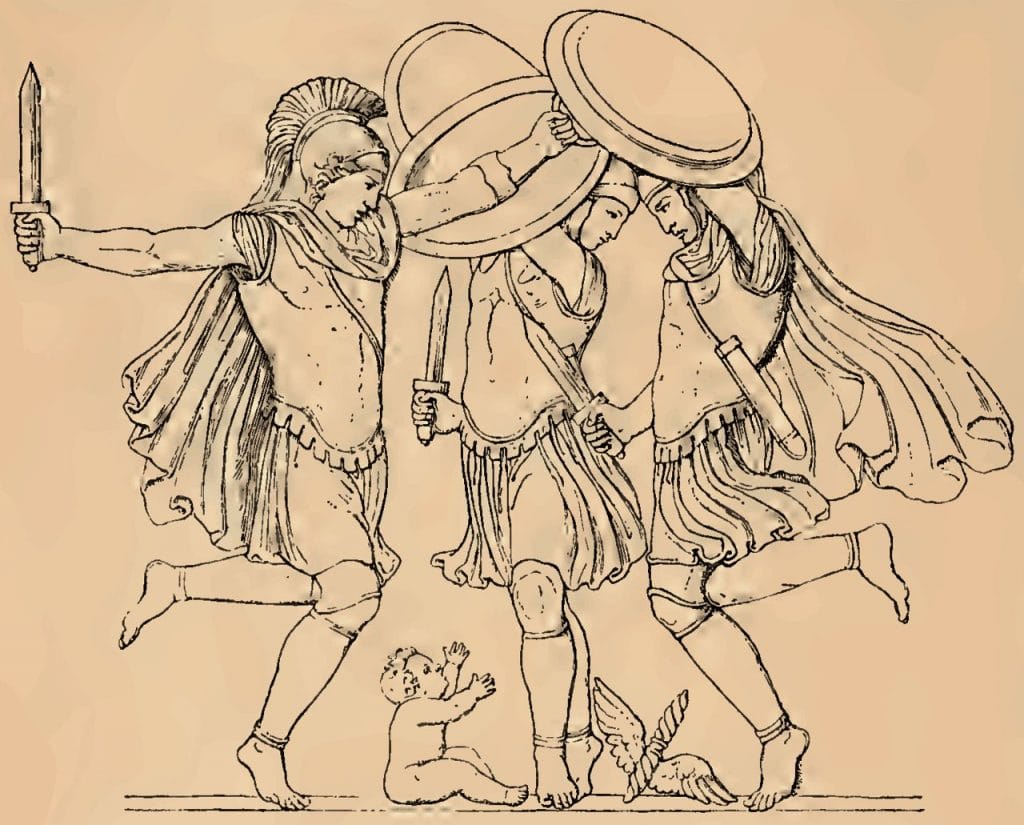 the curetes were young men who dedicated themselves to the service of the divinity and formed a true caste among themselves, distinct from the rest of the nation. It is to the Curetes that, according to the myth, Rhea entrusted the education and the maintenance of Zeus.

According to the writings of historians such as Diodorus and Servius, the Cretans invented the armed dance which they performed in the solemn feasts of Zeus and Rhea. They taught the Cretans to gather sheep into flocks and to tame other species of animals for the service of men; they also taught the Cretans the education of bees. They attribute to them the first clearing works that were done on the island.

The origin of the Cretans differs according to the writings. For some, they were the children of the Earth, that is to say the autochthones, for others the descendants of the Dactyls. According to an ancient tradition that dominated the island of Crete and to which most of the authors adhered, the Curetes were originally from Phrygia who came to Crete at the invitation of Rhea.

Amalthea , however , was such a frightful looking animal that the Gods begged Gaea to with draw her from their sight . This was accordingly done , and the goat was hidden in a cave in the island of Crete , where she nursed Zeus .Amalthea was afterwards placed among the stars , where she still shines under the name of Capella , but her skin became the famous Ægis , the shield of Pallas Athene. Bees were also supposed to have brought him food .

When Zeus matured in knowledge and power , Metis , the Goddess of Wisdom , gave him an emetic for Chronos , who was obliged to bring up all the five children he had swallowed . Zeus then deprived him of his kingdom , and divided it with his two brothers , Pluto and Poseidon . Pluto received the Underworld , Poseidon the sea , but Zeus retained the heavens and the earth for himself .

Zeus became a powerful god and rebelled against Cronus . The Hecatoncheires and Cyclopes were released from Tartarus by Zeus , and they allied themselves to his cause ; the former lending their immense muscular strength , and the latter furnishing thunderbolts and lightning . Cyclopes gave Poseidon the mighty trident , and Pluto , the helmet , which made him invisible , while for Zeus they brought the flashing lightning from the depths of the earth .

The Titans remained true to their brother Cronus , except Oceanus , Themis , Mnemosyne , and Hyperion , all of whom allied themselves to Zeus or remained neutral . Cronus and his allied Titanic forces were on Mount Othrys , while Zeus and his allies were on Mount Olympus ( Thessaly ) . This war ( Titanomachia ) lasted ten years , and then resulted in the victory of Zeus .

Cronus , with Iapetus and the other allied Titans , was imprisoned in Tartarus ; Poseidon built around it a wall of brass , and the Hecatoncheires were placed there as perpetual guards . Menctius , son of Iapetus , shared his father ‘ s imprisonment , while Atlas was condemned to stand for ever at the extreme west , and to support on his shoulder the solid vault of heaven

Abduction of Europa by Zeus

Europa was a Phoenician woman of high lineage that descended from Io, the nymph beloved of Zeus, who was transformed into a heifer. She was the daughter of Agenor, the Phoenician king of Tyre. Her mother was Telephassa (“far-shinning”). She had two brothers, Cadmus, who brought the alphabet to mainland Greece, and Cilix, who gave his name to Cilicia in Asia Minor. Zeus was enamoured of Europa and decided to seduce her. He transformed himself into a tame white bull and mixed in with her father’s herds. While Europa and her helpers were gathering flowers, she saw the bull, caressed his flanks, and eventually got onto his back. Zeus took that opportunity and ran to the sea and swam, with her on his back, to the island of Crete. He then revealed his true identity, and Demeter dressed the bride. Europa then became the first queen of Crete. Zeus gave her a necklace made by Hephaestus and three additional gifts: Talos, Laelaps and a javelin that never missed. Talos was a giant man of bronze to protect Europa in Crete from pirates and invaders. He circled the island’s shores three times daily while guarding it. Laelaps was a hound which never failed to catch what he was hunting.

Europa had three sons by Zeus: Minos, Rhadamanthus, and Sarpedon. Minos and Rhadamanthus, along with Aeacus would become the three judges of the Underworld when they died. The continent of Europe was named after the maiden. In memory of their union, Zeus later re-created the shape of the white bull in the stars, which is now known as the constellation Taurus. 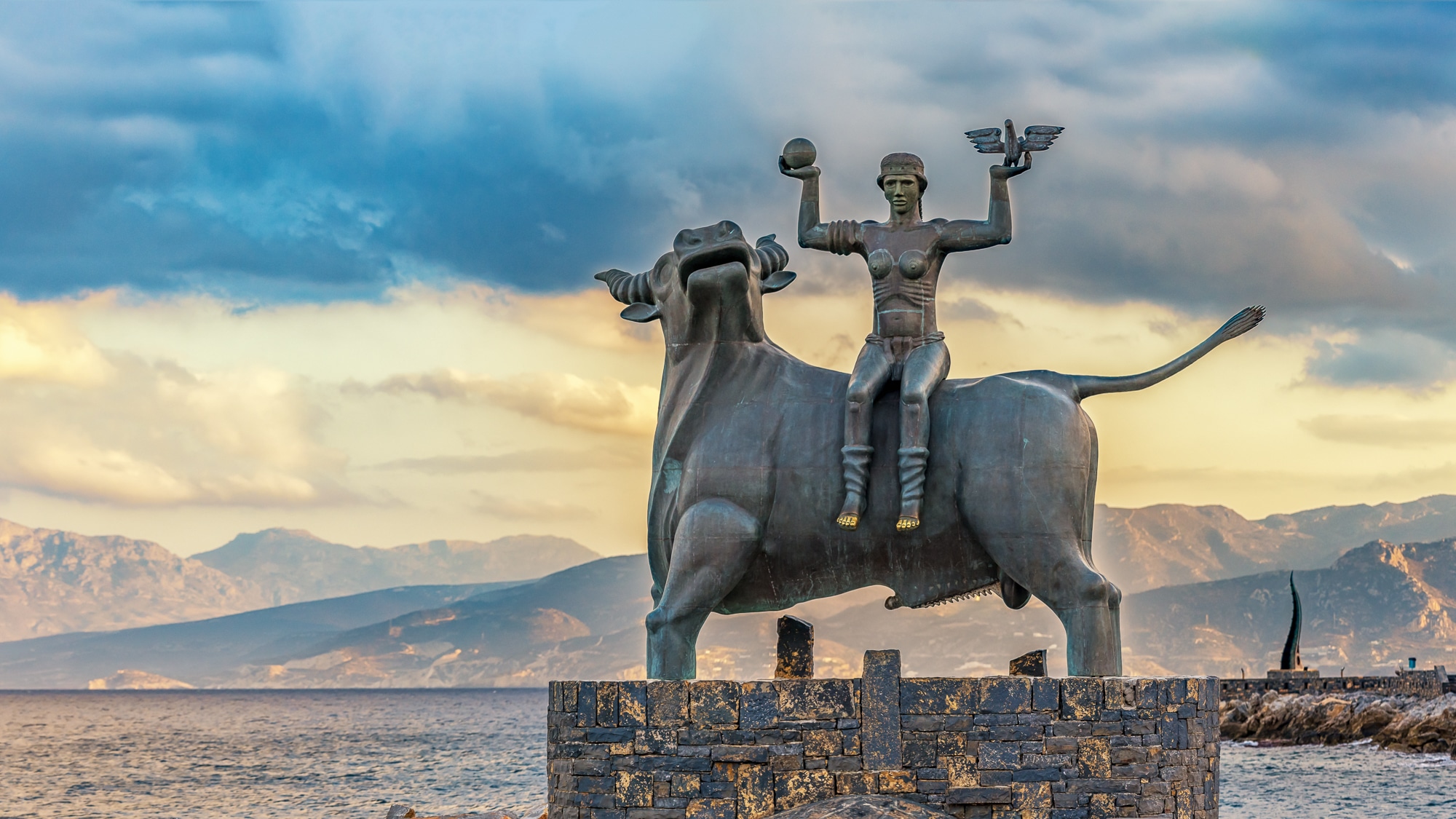 The abduction of Europa by Zeus. statue, Agios Nikolaos, Crete 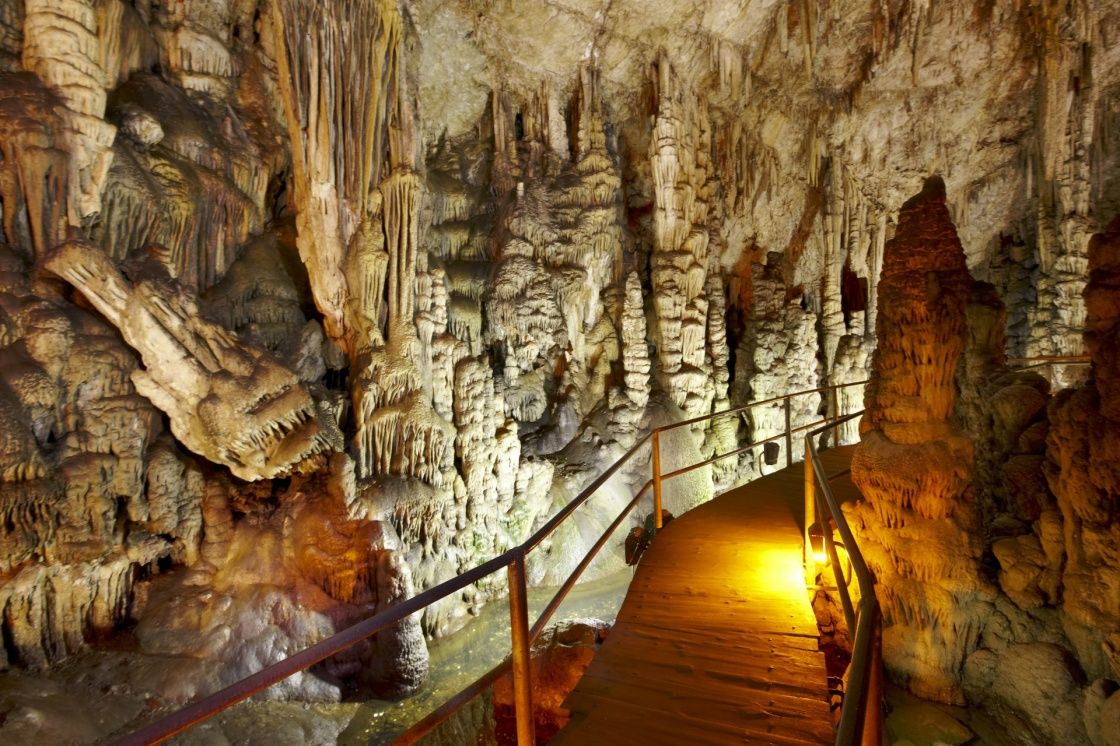